Members The Epoch of Reionisation researchers at Curtin University 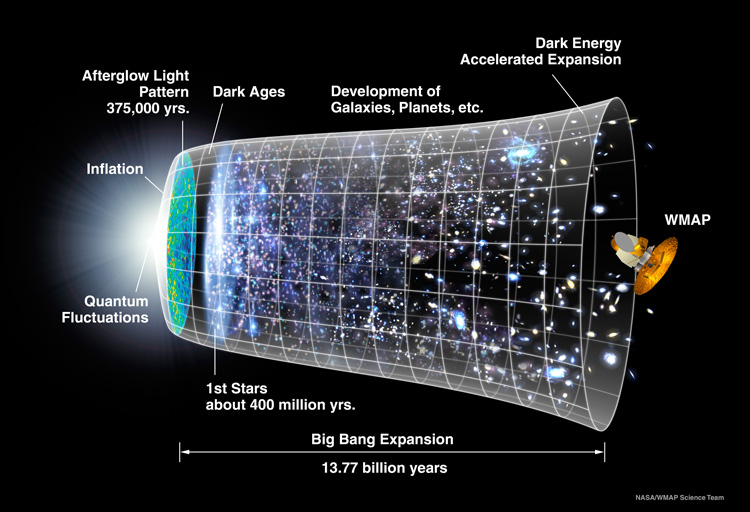 A brief history of the early universe

The cosmic microwave background to the Epoch of Reionisation

The Epoch of Reionisation is a period of the universe’s history that spanned from ~400 Million years after the Big Bang until ~1 billion years after the Big Bang, during which the universe came to resemble what we live in today. During the preceding cosmic dawn, the first stars and galaxies formed from collapsing clouds of gas. The transformation of the hydrogen gas in the spaces between the galaxies by ionising light from these early stars and galaxies is known as the Epoch of Reionisation. Being able to observe changes in the hydrogen gas during these large periods of the universe’s history could tell us about how and why the universe looks the way it does today.

After the emission of the Cosmic Microwave Background (CMB), 400,000 years after the Big Bang and ~360 Million years before the Epoch of Reionisation, the universe was full of neutral hydrogen – atoms made of one proton and one electron. Hydrogen is the most abundant element in the universe, and immediately after the CMB was the dominant element. This period is known as the cosmic dark ages, and during this time the huge clouds of neutral hydrogen collapsed into denser clouds due to the slight density perturbations which can be seen in CMB maps. Observationally this period should be seen in the radio spectrum of light at a very specific wavelength, and is the signal we are currently searching for. 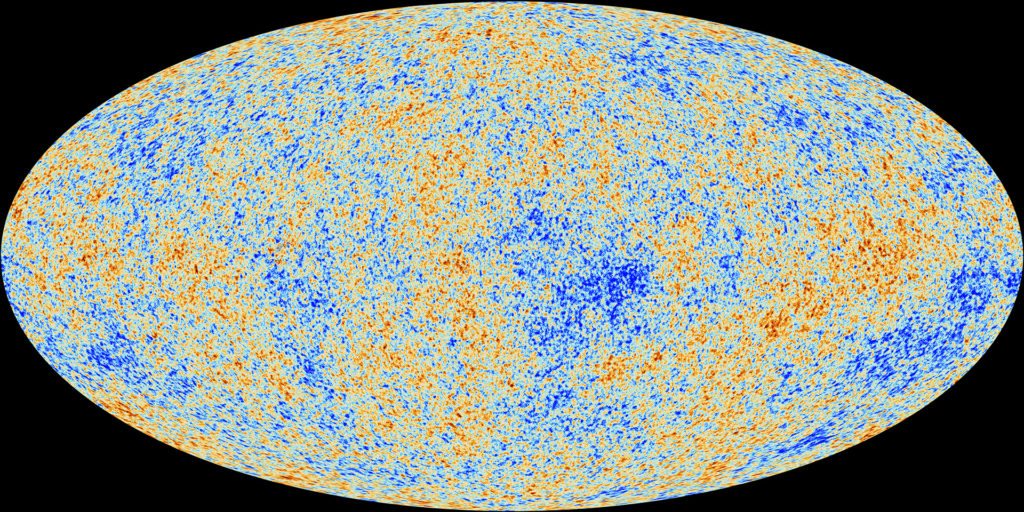 The wavelength of light emitted by an atom or molecule is determined by the structure within the particle, and how that structure changes. A hydrogen atom’s electron and proton have a property called spin, and the relative spins of these particles can either be aligned or anti-aligned within the atom. When the electron and proton are aligned, the atom itself has a slightly higher overall energy than when they are anti-aligned, and an atom can spontaneously switch from aligned to anti-aligned, called a “spin-flip transition”. According to the conservation of energy law, if an atom makes a spin-flip transition to a lower energy state, the difference in energy states must go somewhere, and this somewhere is a photon (a packet of light). Because the energy difference between the two spin alignments is exact, the energy (and therefore wavelength) of the emitted light is always the same; for neutral hydrogen it is a radio wave with a wavelength of 21 cm. This “21-cm line”, as it’s known, is the dominant wavelength of light during the cosmic dark ages, because there are no stars or galaxies during this period to produce large quantities of other wavelengths of light, except for the CMB blackbody afterglow. 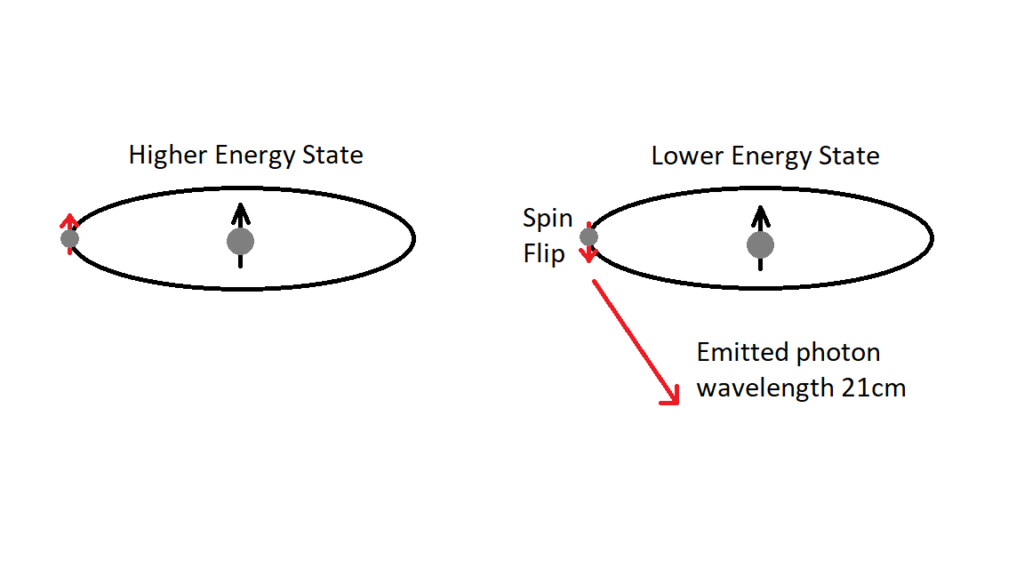 Figure: Representation of the Hydrogen spin-flip and the resulting emission of a radio wave with a wavelength of 21cm.

As the clouds of neutral hydrogen cool, gravity causes them to collapse into denser clouds, and at some point the density of these clouds increases so much that a new process is triggered — nuclear fusion. Nuclear fusion is what fuels our sun and causes all the stars to shine bright. Nuclear fusion is the process of forcing the cores of atoms together to create new, heavier atoms. The first stars formed this way were massive (hundreds of solar masses) and did not live long (a few million years) because they fused hydrogen into helium. These stars were only capable of ionising small amounts of neutral hydrogen, (ionisation is the removal of an electron from an atom) because they mostly produced ultra-violet (UV) light. This light was, however, capable of changing the radio signal because it connected the light from the stars to the hydrogen signal brightness. This was enough to heat the hydrogen from the very cold background temperature to match the radiation temperature of these stars. This rapid change in the radio signal occurred over a 100 million years and provides us with a timestamp for the formation of the first stars.

The Epoch of Reionisation started when the first stars and their remnants produced light powerful enough to ionise the neutral hydrogen. As the second generation and later stars formed they were contaminated with elements heavier than hydrogen that formed in the first stars, allowing them to produce more energetic light. This light was in the UV and X-ray frequencies, and as it propagated out from these bright stars and their remnants, it would ionise the surrounding hydrogen. With the death of the first and later stars came a major contributor to the ionisation of hydrogen – accreting stellar mass black holes. These black holes had disks of material (accretion disks) falling onto them, contributing X-ray photons that could ionise vast quantities of the neutral hydrogen surrounding them. 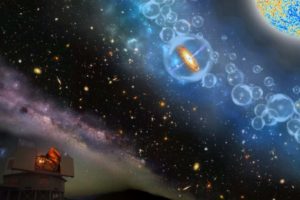 Figure: Artist’s impression of the evolution of the Universe. Within the blue arc is visible the ionised structures that look like bubbles, the most striking of which is an accreting black hole. Image credit: Robin Dienel, Carnegie Institute for Science.

Ionised hydrogen does not produce the 21cm line, because it requires an electron to do so, and the process of ionisation removes a hydrogen atom’s only electron. As more of these ionising objects formed, these growing pockets of ionised gas around them began to overlap one-another until the hydrogen in the universe was almost fully ionised. This marks the end of the Epoch of Reionisation, and the beginning of the universe as we know it.

Figure: Two different possible evolutionary paths of neutral gas in the Universe. These paths are being probed by low-frequency radio telescopes, such as the Murchison Widefield Array. Image credit: Andrei Mesinger (SNS, Italy).

ARC Centre of Excellence for

All Sky Astrophysics in 3 Dimensions