Assuming the lockdown in the South West does not get extended past its initial 5 days, we will be attending Astrofest 2021 on the 20th of Feb. More info and updates available on the Astrofest website.

The Epoch of Reionisation group are passionate about communicating their science to the public, and inspiring everyone to get involved in astronomy.

Make sure you don’t miss out on the fun and keep up-to-date with the list of upcoming and past events in the tabs below.

If you would like our team to be part of an event you are organising, please email our outreach coordinator.

The Epoch of Reionisation team were all involved. The ASTRO 3D MWA EoR Curtin group and the ASTRO 3D Genesis UWA group were well represented at the ASTRO 3D stall. We ran our ever popular “Epoch of Bubbles” and the “Escape the CMB” maze activities, pulling hundreds of visitors past our stall.

On Monday 7 October, our Outreach Coordinator, Teresa Slaven-Blair and two volunteers from the UWA ASTRO 3D node, Tristan Reynolds and Pascal Elahi  spent half a day talking astronomy at the Perth Children’s Hospital. Activities included presenting on Livewire’s internal TV channel that’s available to every child, engaging those in the Starlight Room with our Epoch of Bubbles activity and DIY Scale Model Solar System sticker sets, and chatting one-on-one to interested teens.

Special thanks to PCH Arts Facilitator, Hayley Bahr for helping us organise this special event.

Meet the Scientists - Sign Me Up! National Science Week 2019 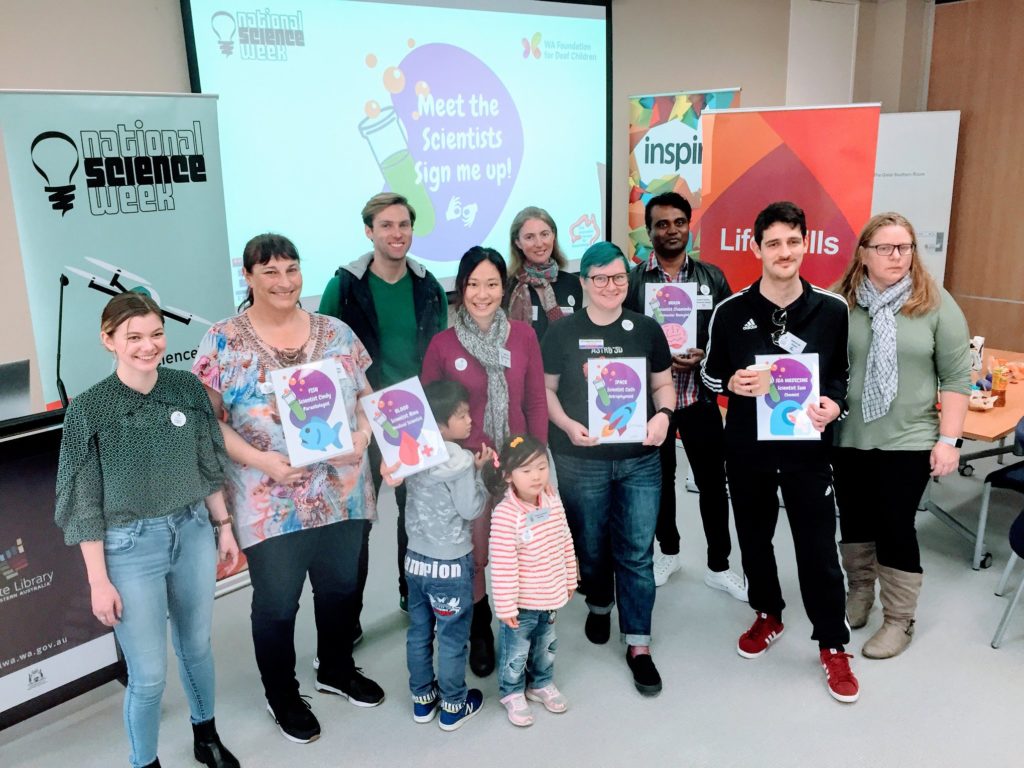 Group photo of the scientists who participated in the event

Our team lead A/Prof Cathryn Trott and Dr Christene Lynch participated in “Meet the Scientists, Sign me up!” as part of National Science Week 2019. This event engaged deaf and hard of hearing children aged 5 – 12 years, their siblings and peers with science, providing them with exposure to science as a career pathway, with the aim to build their confidence in scientific concepts and inspire them through science. 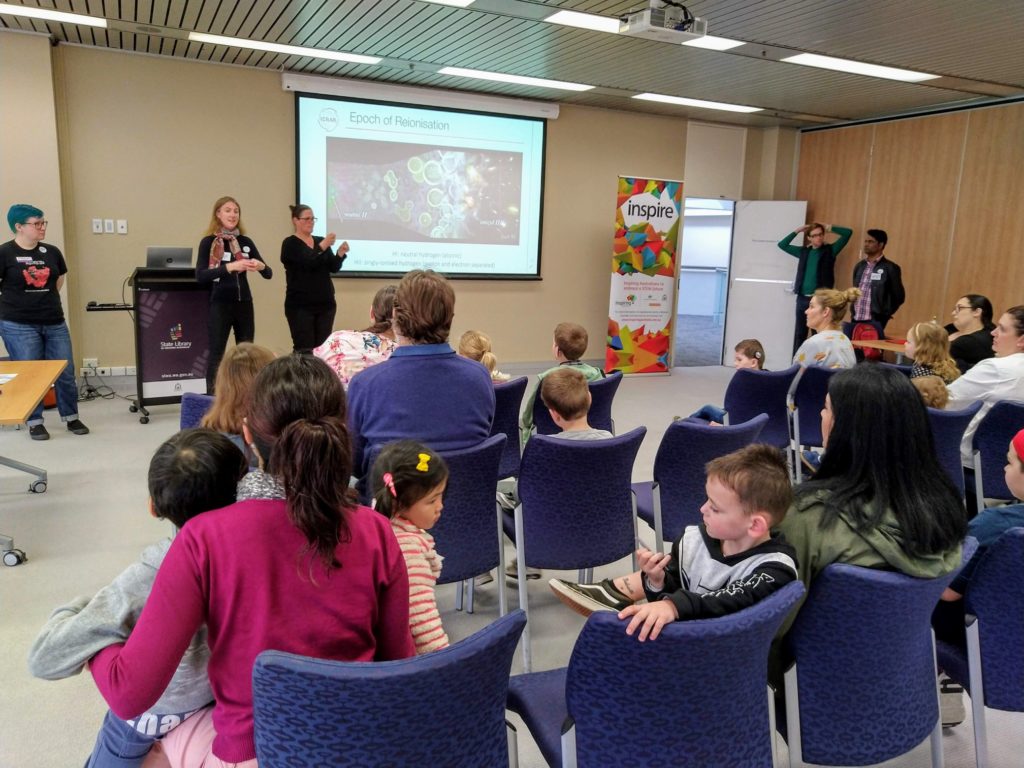 Cathryn and Christene presenting to deaf and hard of hearing children about the formation of the first stars and galaxies during the Epoch of Reionisation, with the help of an AUSLAN interpreter. 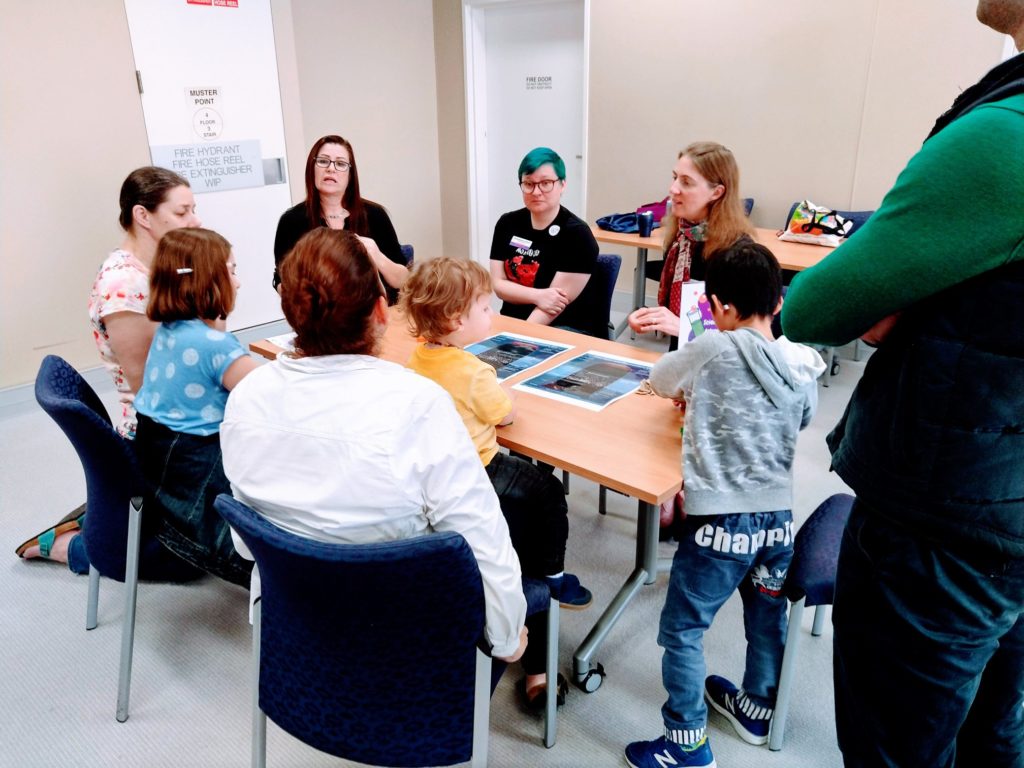 Cathryn and Christene in a break away discussion session so the kids and their parents can ask more questions.

Thank you to Rina Fu, author of “My Mad Scientist Mummy” who was the main driving force behind organising this event and reaching out to our Epoch of Reionisation research group. 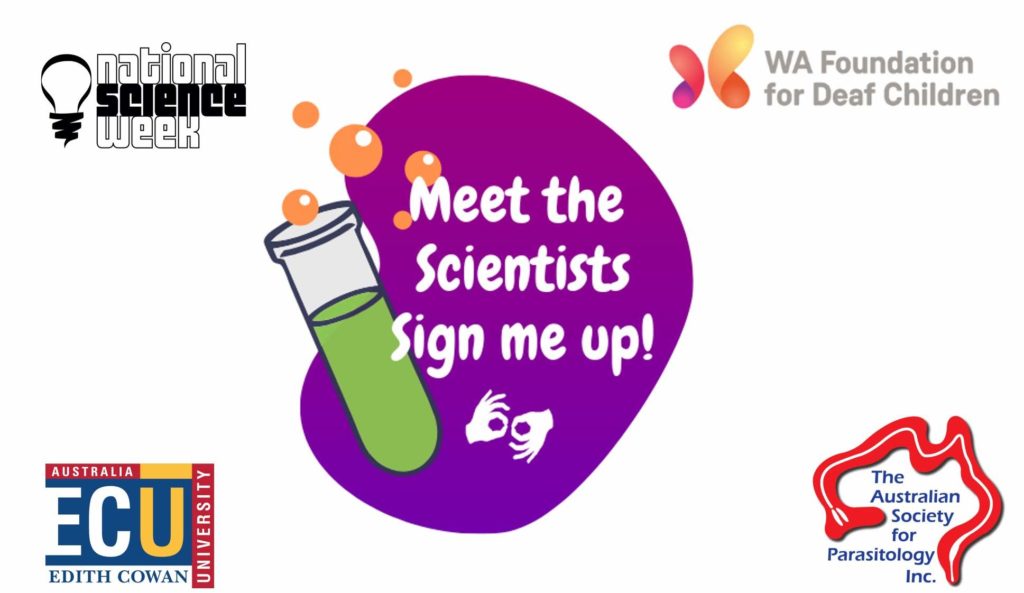 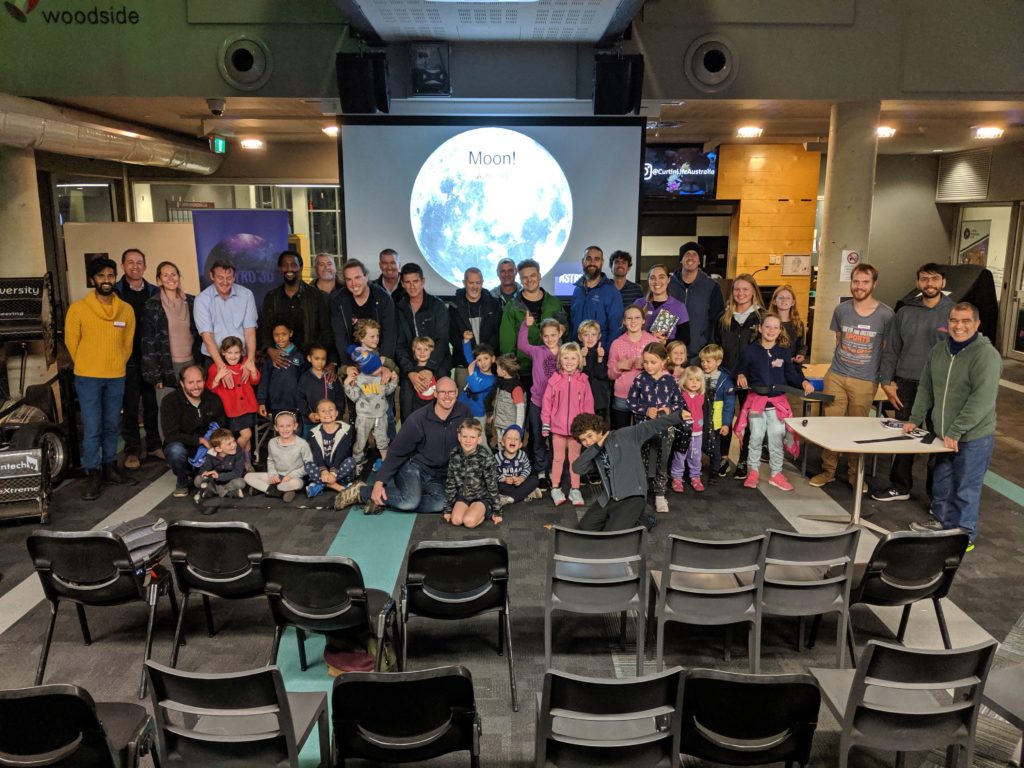 Running an astronomy night for the upcoming Apollo 11 50th anniversary in Perth, Western Australia has one major problem – it’s the middle of winter!

Despite this very foreseeable issue, the two astronomy nights on the 9 and 10 of June were both a huge success.

On the 9th, the clouds parted and we got amazing views of the Moon and the Sea of Tranquillity (the Apollo 11 landing site) through the two Dobsonian telescopes Curtin STEM Outreach lent us for the event. On the 10th, the cloud cover was complete the entire evening, so we brought the telescopes inside, tacked photos of space objects all over the building and got the kids to try to find them!

We also had a very messy and delicious smelling crater making activity, using flour, cocoa powder and rocks to recreate the kinds of craters visible on the Moon, and talks on the Moon from Dr Jack Line and Dr Ben McKinley.

Thank you to the entire EoR team for volunteering their time and energy to engaging the most excitable young people around.

Perth’s ASTROFEST is the largest astronomy festival in Australia, and 2019 saw its 10 year anniversary. 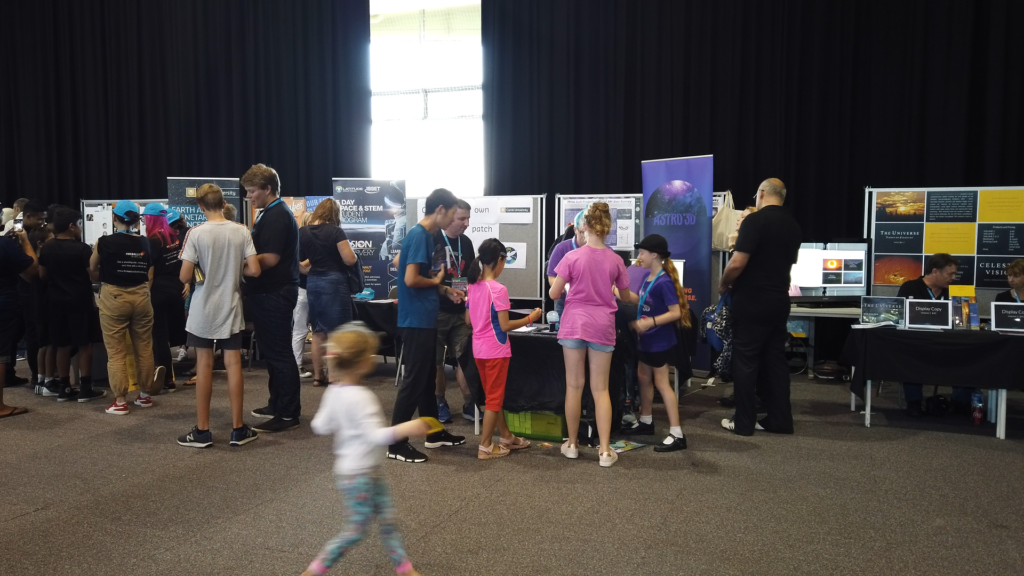 The ASTRO 3D Perth nodes had a stall that enticed participants to it with the promise of creating a baby Universe with the “Epoch of Bubbles” activity – where bubble art is used to explain the reionisation of the early Universe. 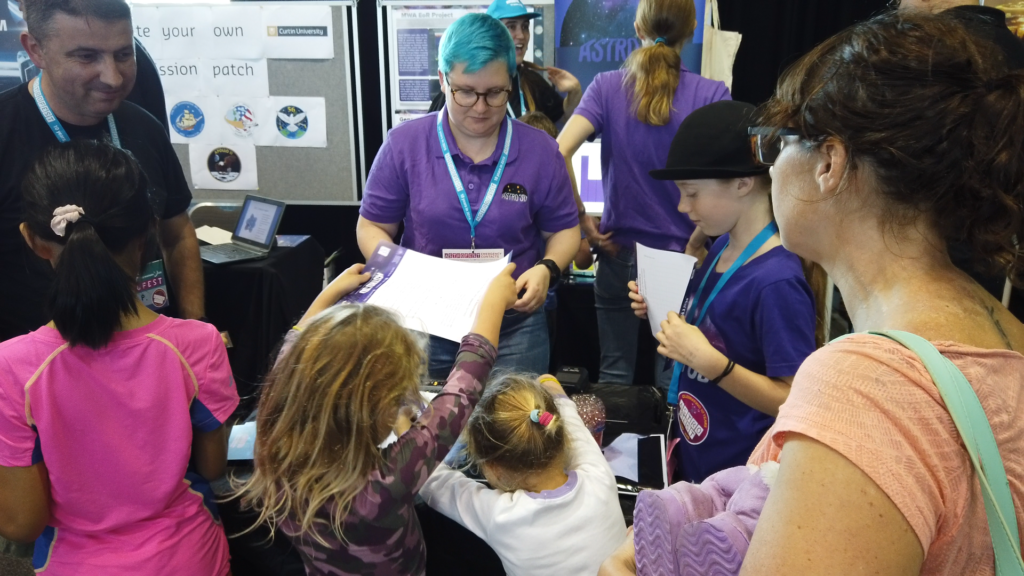 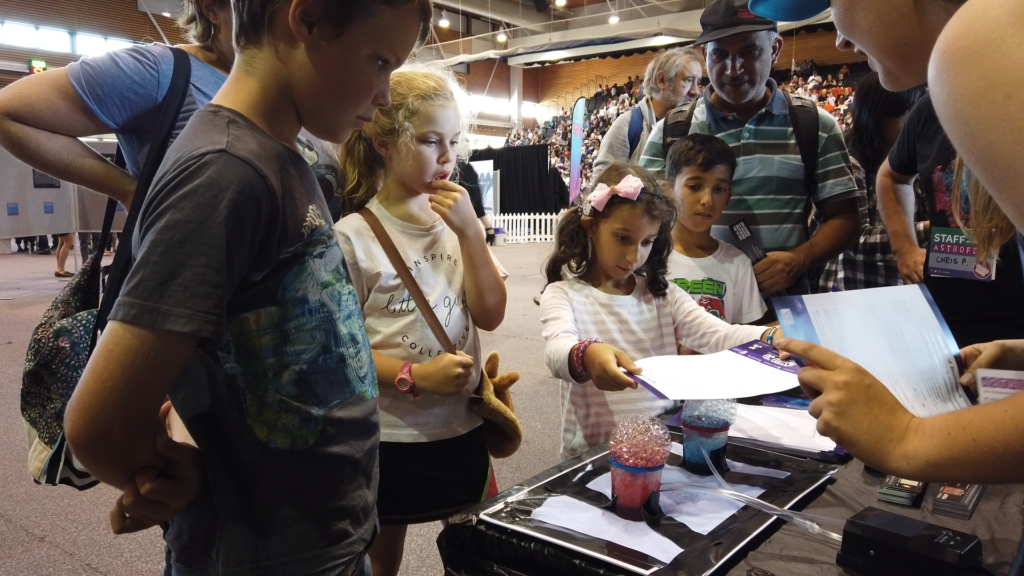 The 2019 Perth ASTROFEST participants creating their own baby Universe with the “Epoch of Bubbles” activity at the ASTRO 3D stall. Top: Chris Power and Christene Lynch engaging with the general public. Bottom: General public participating in the activity. Image credit: Phillip Verschuer.

The premiere of the new “Escape the Cosmic Microwave Background” maze activity featured, asking participants to take a random walk with every roll of a D4 to escape the maze, or get trapped by yet another particle. 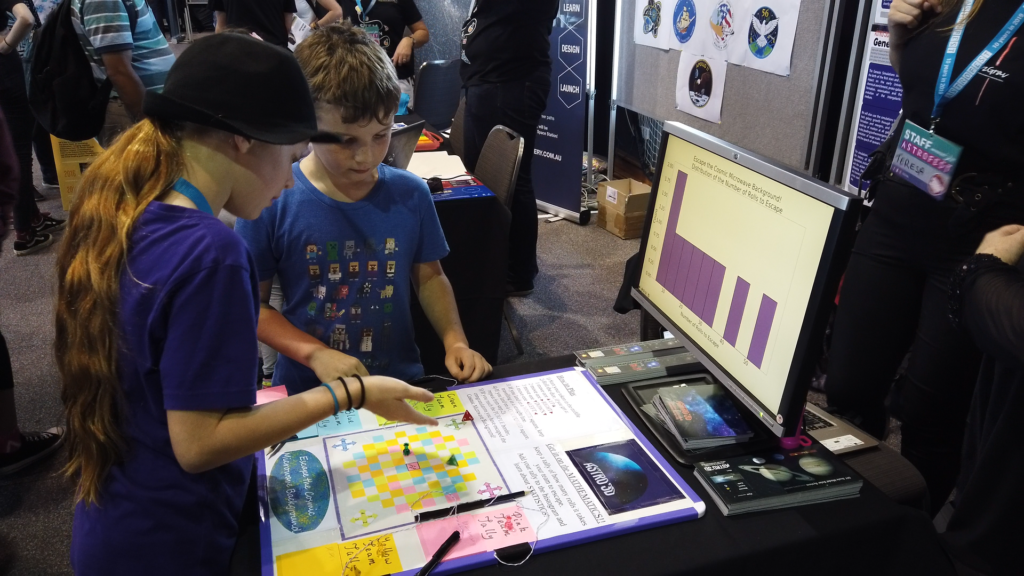 Children at the 2019 Perth ASTROFEST participating in the “Escape the Cosmic Microwave Background” maze, and contributing to the statistical distribution shown on the screen. Image credit: Phillip Verschuer.

Tallies of the number of rolls to escape were gathered over the night and prominently displayed in real-time to serve as a tool for statistical outreach. One child dogmatically stayed until they escaped – 78 rolls later!

The distribution of number of rolls as gathered by participants at the 2019 Perth ASTROFEST. Image credit: Teresa Slaven-Blair. 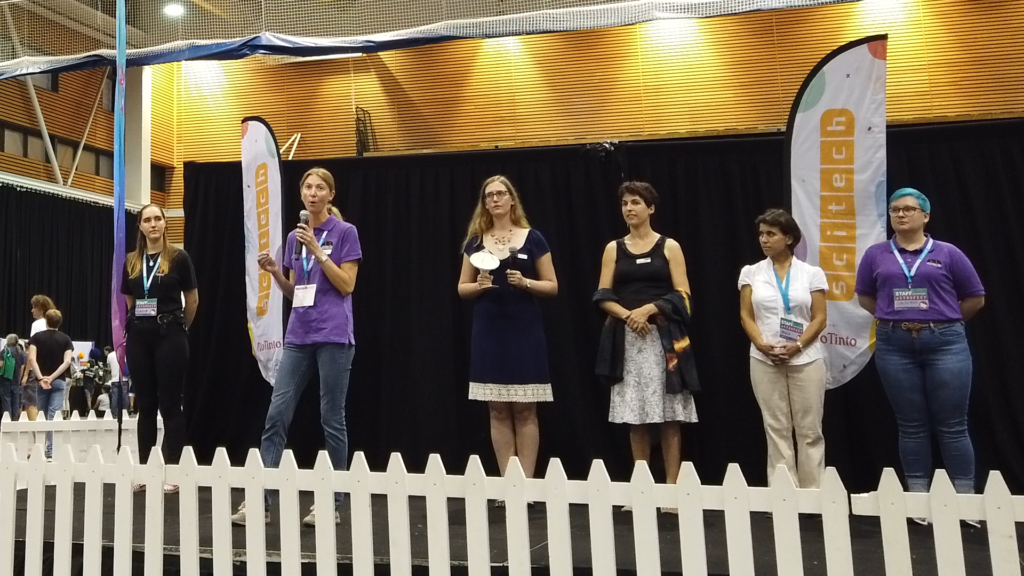 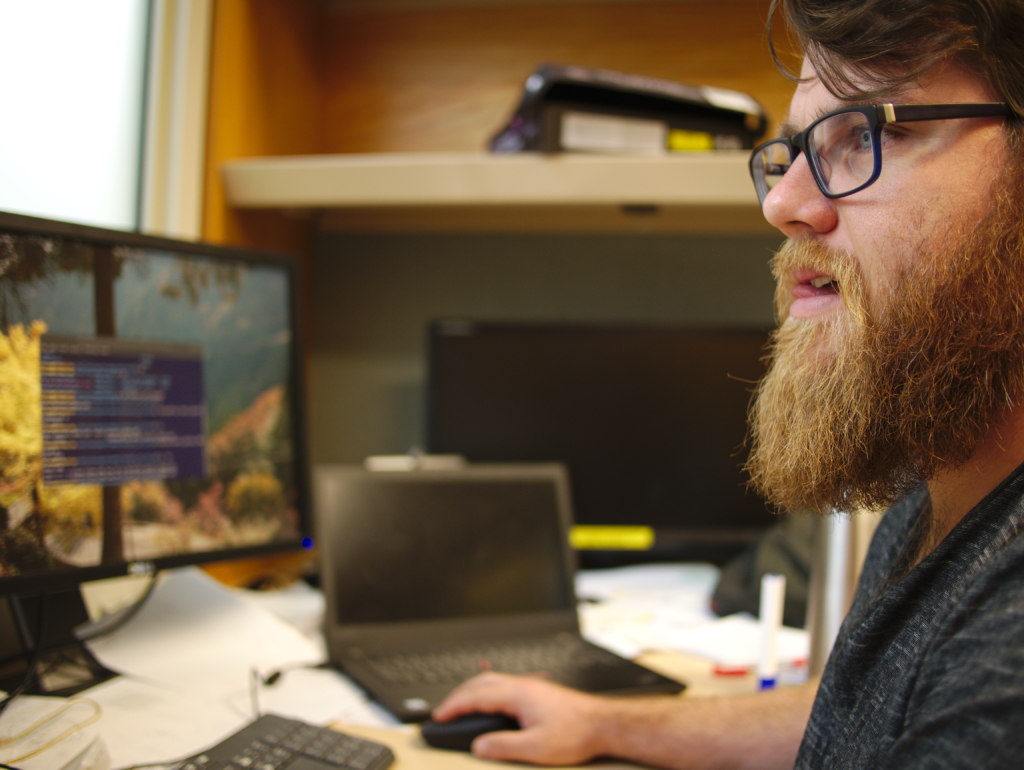 The 2019 Perth ASTROFEST was a huge success for the Curtin Epoch of Reionisation group, as well as our ASTRO 3D colleagues from the UWA Genesis Simulations group who we shared the ASTRO 3D stall with. We look forward to returning for the 2020 Perth ASTROFEST.

The Perth Science Festival was a massive success. With ~7,000 people coming through the doors over the weekend, we were flat out at the ASTRO 3D stall. Both days we ran out of activity sheets, but on Sunday we ran out so early we had to send someone off to get sheets of plain white paper! The idea of “making your own baby Universe” was great for sparking interest in our stall, and we had people staying for long discussions about the science. The activity was such a success we will be looking out for future opportunities to run it again! We were also proudly displaying a Murchison Widefield Array dipole (part of a radio telescope) and visualisations on two monitors showing simulations of the EoR, how the MWA was built and the scales of the Universe. 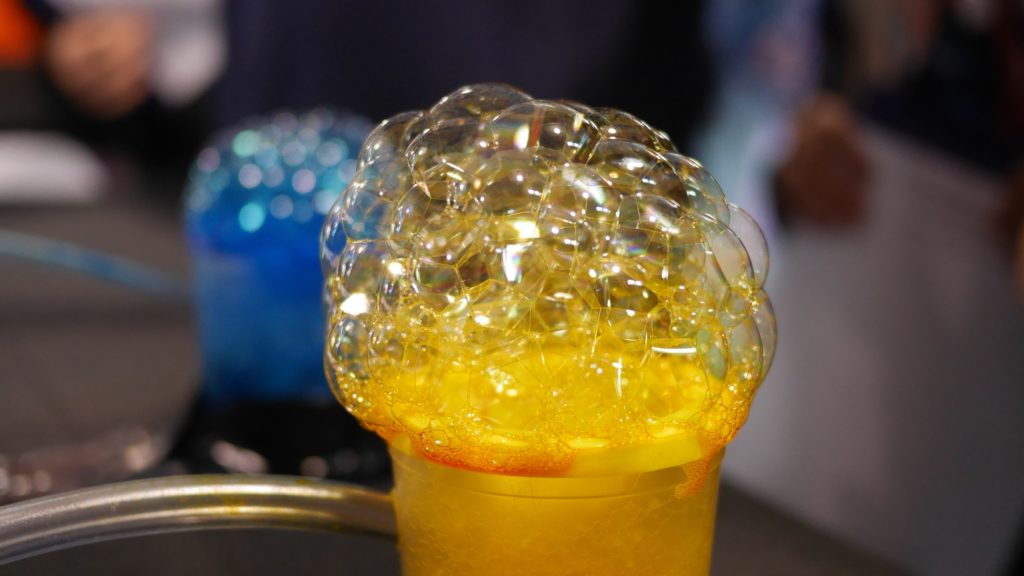 The Epoch of Reionisation stall at the Perth Science Festival formed part of the National Science Week celebrations in Perth, on the 18th and 19th of August at the Claremont Showgrounds. We had “Make Your Own Baby Universe” bubble-based activities designed to help you understand the principles behind our observations of the early Universe. These activities were exceptionally popular with primary school children but we also had many playful and curious teens and adults making their own baby Universe’s. 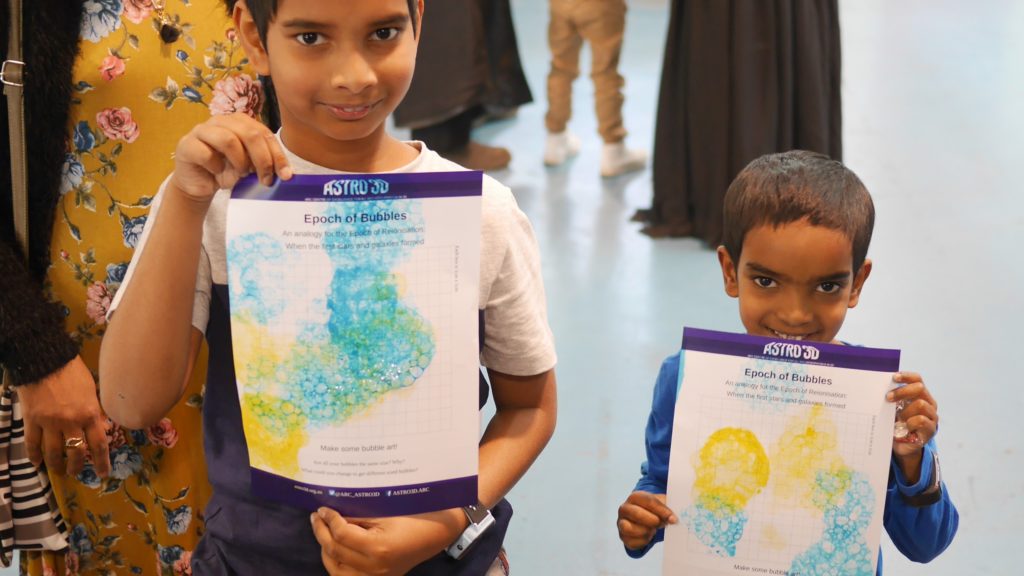 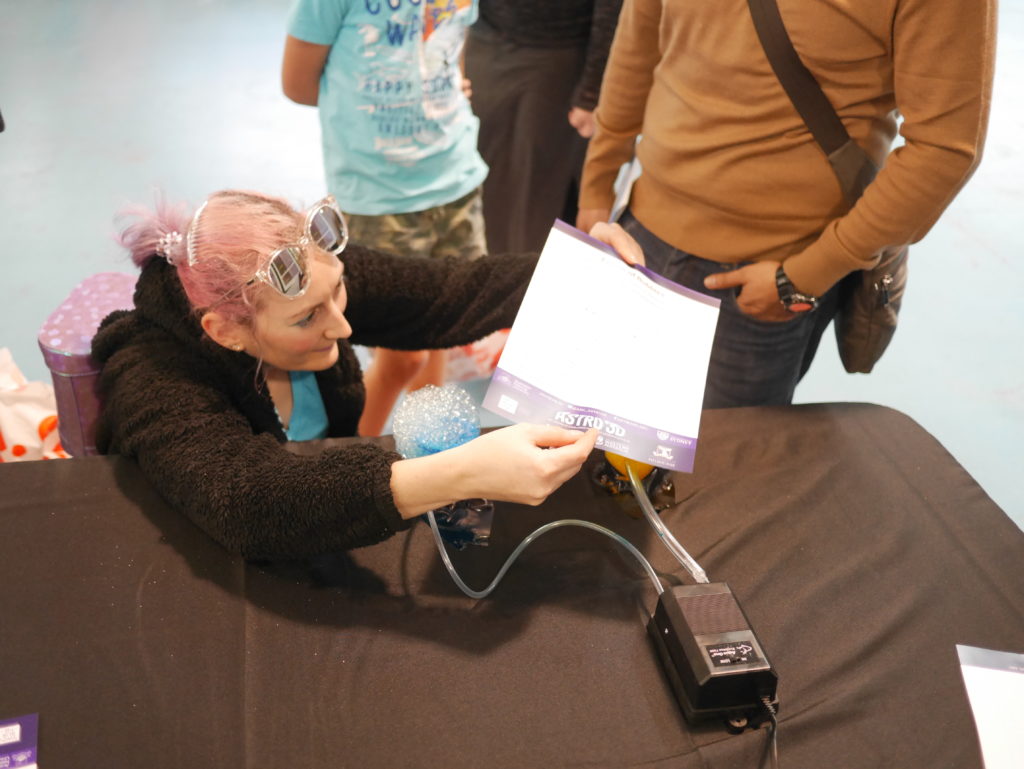 Adult carefully designing a baby Universe and taking pleasure in their own experiment, day 1 of the festival. Image credit: Teresa Slaven-Blair and Phillip Verschuer

The stall was attended by the scientists whose research the activities were based on and we had many in-depth conversations about how we hope to detect the EoR, what we do as scientists, how the telescopes work and the diverse opportunities and pathways that allowed each of us to get into a science career. 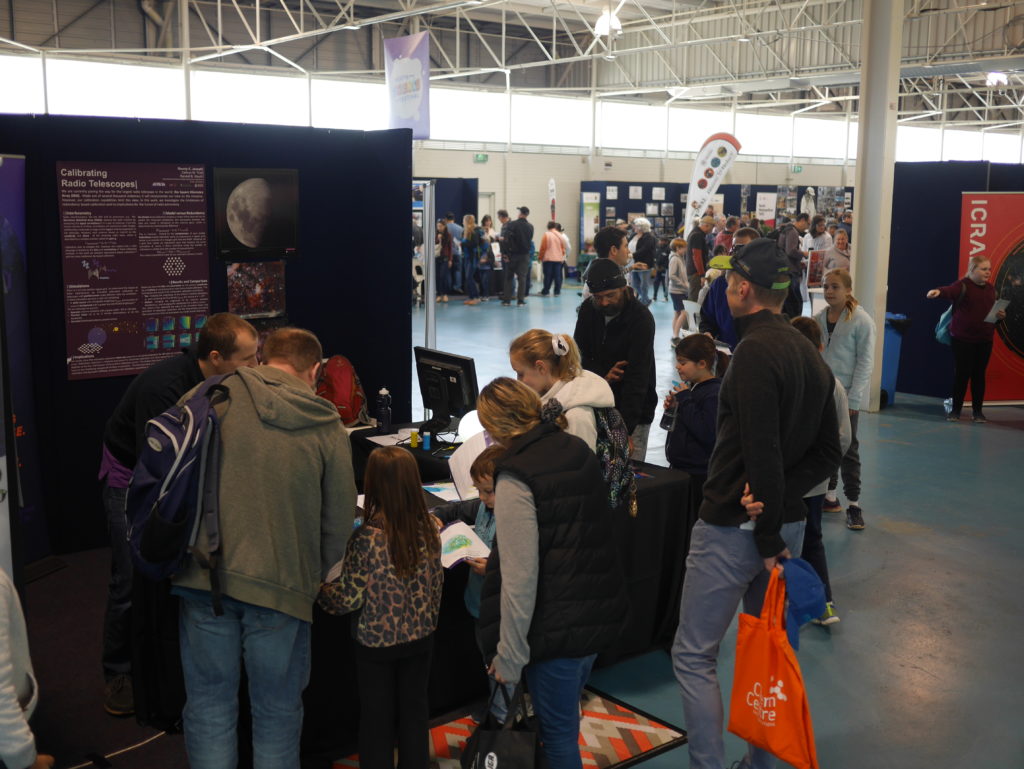 People making baby Universe’s, watching videos of the MWA being built or simulations of the EoR, and coming face-to-face with one of the thousands of MWA dipoles we use to detect the radio Universe, day 1 of the festival. Image credit: Teresa Slaven-Blair and Phillip Verschuer. 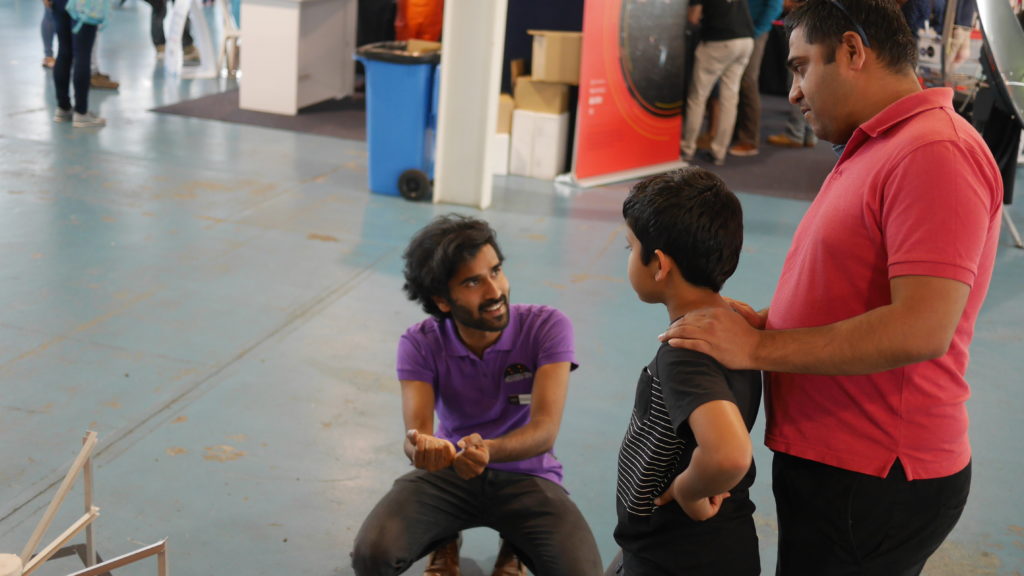 PhD student Ronniy explaining how the MWA is used to detect the Universe, day 2 of the festival. Image credit: Teresa Slaven-Blair and Phillip Verschuer

We hope those who attended the event will fondly remember making their baby Universe, and those that missed out will be able to join us next time we run this new and exciting activity that helps us explore the evolution of the Universe during its first 1 Billion years after the Big Bang!

Video of the event is available here

In the 2018 round of Fresh Science, we are proud to announce that early-career researcher Dr Ben McKinley has been shortlisted for his recent research on the Epoch of Reionisation. The prize includes a day of media training at Fremantle’s Maritime museum, followed by a day of science communication to a range of audiences.

Ben’s performance in June at the Science in the Pub event was fantastic. He had to explain his research to an audience in the time it took a party sparkler to burn out (pictured below) and answer a lot of audience questions about it. 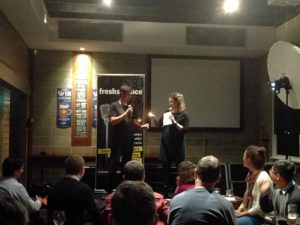 Ben getting his sparkler lit to time his explanation of his research. Image credit: Teresa Slaven-Blair

The Fresh Scientists (pictured below) were also told of a surprise round where they had to turn their science into either a limerick or a haiku. Ben’s haiku got a special mention for including a plea for funding! 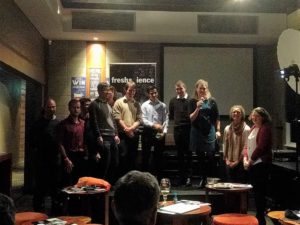 All nine of the Western Australian Fresh Scientists for 2018. Image credit: Teresa Slaven-Blair

More information about the competition can be found here.