New Limits on Finding the First Stars and Galaxies

Finding the first stars and galaxies is hard, but we’re now one step closer to achieving it!

Our team leader, A/Prof Cathryn Trott has recently led new research that takes the world that one step closer to finding evidence of the first stars and galaxies during the Epoch of Reionisation (EoR). Using 110 hours of observations made by the Murchison Widefield Array (MWA), the team is trying to characterise the size of the ionised bubbles around the stars that had formed between 740 My to 830 My after the Big Bang.

The next image is the comparison of what the team led by Cath has managed to measure to what other teams with other telescopes have detected in the past. Within the range of what the MWA can observe, their results are pushing the closest to theoretical signal.

The new results are shown as inverted orange triangles with a purple boarder. Circles represent the typical expected EoR power levels. Other points cover all other published upper limits on the EoR signal.

The Moon may be the key to unlocking how the first stars and galaxies shaped the early Universe. 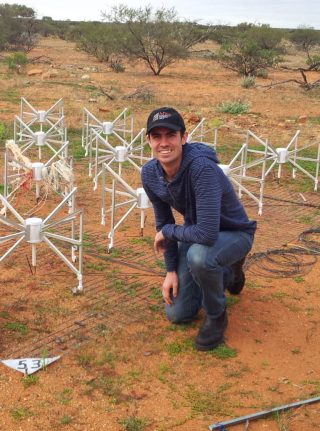 A team of astronomers led by Dr Benjamin McKinley at the Curtin University node of the International Centre for Radio Astronomy Research (ICRAR) and the ARC Centre of Excellence for All Sky Astrophysics in 3 Dimensions (ASTRO 3D) observed the Moon with a radio telescope to help search for the faint signal from hydrogen atoms in the infant Universe.

“Before there were stars and galaxies, the Universe was pretty much just hydrogen, floating around in space,” Dr McKinley said.

“Since there are no sources of the optical light visible to our eyes, this early stage of the Universe is known as the ‘cosmic dark ages’.”

The period when the first stars and galaxies started forming out of the hydrogen is known as the ‘epoch of reionisation’, and has yet to be detected.

Artist’s impression of a portion in the timeline of the Universe, around the ‘epoch of reionisation’ – the process that ionised most of the material in the cosmos.

In research published in the Oxford University Press Monthly Notices of the Royal Astronomical Society today, the astronomers describe how they have used the Murchison Widefield Array (MWA) radio telescope to help search for radio signals given off by the hydrogen atoms.

“If we can detect this radio signal it will tell us whether our theories about the evolution of the Universe are correct.”

Dr McKinley said that in your car radio, you can tune into various channels and the radio waves are converted into sounds.

“The radio telescope, the MWA which is located in the Western Australian desert far away from earth-based FM radio stations, takes the radio signals from space which we can then convert into images of the sky,” he said.

This radio signal from the early Universe is very weak compared to the extremely bright objects in the foreground, which include accreting black holes in other galaxies and electrons in our own Milky Way.

In this work, the astronomers used the Moon as a reference point of known brightness and shape. This allowed the team to measure the brightness of the Milky Way at the position of the occulting Moon.

The astronomers also took into account ‘earthshine’—radio waves from Earth that reflect off the Moon and back onto the telescope. Earthshine corrupts the signal from the Moon and the team had to remove this contamination from their analysis.

With more observations, the astronomers hope to uncover the hydrogen signal and put theoretical models of the Universe to the test.